The sixth grade students are in the midst of working on the European Renaissance, pondering ideas such as relgious liberty, pluralism, the ideals of Western society, and scientific innovation.

We have been engaged in a popular literary work historical fiction on the young life of Mary Tudor, who succeeded Henry VIII and Edward, his son, and preceded Elizabeth I. We have read about the education of a humanist as well as discussed figures such as Thomas More, from whose Utopia we have also read selections. This novel of intrigue and international diplomacy has sustain the students’ interest throughout our reading.

We have also spent quite a bit of time on art history, discussing the aesthetics of Renaissance art through the works of Botticelli, Raphael, and Leonardo so far. We have explored the shifting themes of the art in a time of tumult in Europe. We have also explored the ways in which artists represent proportions of the human body, landscapes, and architecture. Students have paid attention to shadow, depth, and the folds of clothing as signs of an increasing concern with realness.

Our map of Europe as helped us to provide a context for the events of this period and the continents’ ever-shifting borders, lest we ever believe that countries’ borders are divinely ordained and eternally fixed. We have also worked to be able to envision the various political forces at work, especially in the biography of Galileo, whom we have also studied.

Soon, students will engage in their won projects with the material from this period. As usual, please be in touch with me should you have any questions or comments.

P.S. If you’d like to see the students’ understanding of art from this period, feel free to show them this piece below called “The Ambassadors,” painted by Hans Holbein. Even though I have not shown this in class, your child should be able to speak about it in depth sight unseen. 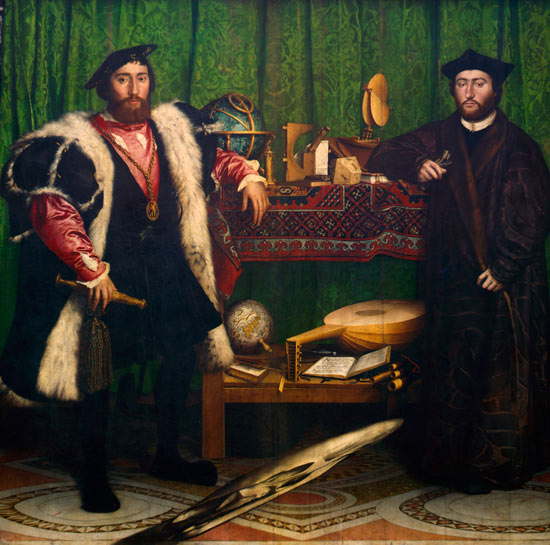